Normal Anatomy of the Hip joint 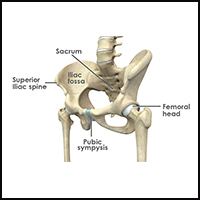 The hip joint is the largest weight-bearing joint in the human body. It is also referred to as a ball and socket joint and is surrounded by muscles, ligaments and tendons. The thighbone or femur and the pelvis join to form the hip joint.

Any injury or disease of the hip will adversely affect the joint's range of motion and ability to bear weight. 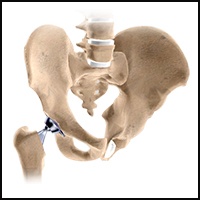 Hip replacement has become necessary for your arthritic hip: this is one of the most effective operations known and should give you many years of freedom from pain.

Once you have arthritis which has not responded to conservative treatment,you may well be a candidate for total hip replacement surgery. 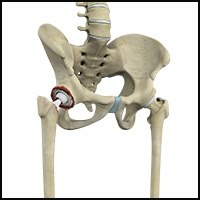 This maybe because complete or a part of your previous hip replacement needs to be revised. This operation varies from a very minor adjustment to a massive operation replacing significant amount of bone and hence is difficult to describe in full. 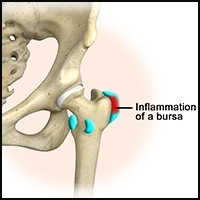 Hip bursitis is a painful condition caused by inflammation of a bursa in the hip. Bursae are fluid filled sacs present in joints between bone and soft tissue to reduce friction and provide cushioning during movement. 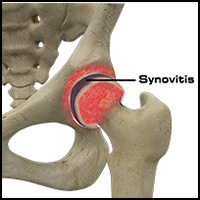 Hip synovitis, also called transient hip synovitis or toxic synovitis is a condition in which there is inflammation of the synovial tissues surrounding the hip joint causing hip pain. It is the most common reason for sudden hip pain occurring in young children between the age of 2 and 9. It affects boys more commonly than girls and most of the times, the hip joint on only one side is affected. 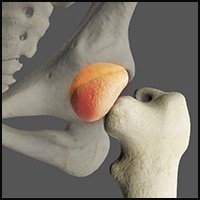 Slipped capital femoral epiphysis (SCFE) is a common hip disorder in adolescents causing slippage or separation of the femoral head (ball at the upper end of the femur bone) from the weakened epiphyseal growth plate (growing end of the bone).This condition often develops during the rapid growth period after the onset of puberty, and may affect one or both legs at a time. The separation may be caused by an injury or other factors such as obesity and hormonal imbalances. SCFE commonly occurs in children between 11 and 15 years and boys are more likely to develop the condition than girls. 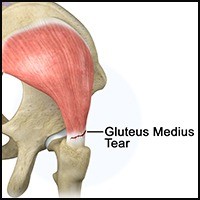 Labral Tears of the Hip 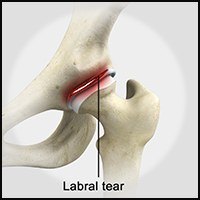 Hip labrum is a cartilaginous membrane lining the socket of the hip joint. Labrum serves many functions where it acts as shock absorber, lubricates the joint, and distributes the pressure equally. It provides cushioning support to the joint. It also deepens the socket and helps to stabilize the joint. It holds the head of the femur in place and prevents the lateral and vertical movement of the femur head with in the joint. It also deepens the acetabular cavity and offers stability against femoral head translation. 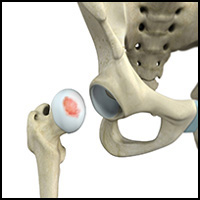 Articular cartilage covering the hip joint can also be damaged by a direct blow to the outer part of the thigh. Femoroacetabular impingement or FAI can also cause chondral injuries. This is a condition characterized by excessive friction in the hip joint causing pain and decreased range of motion. The femoral head and acetabulum rub against each other eventually causing damage to the cartilage. 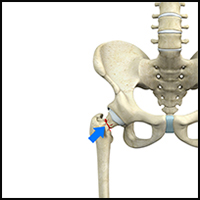 The hip is a ballandsocket joint made up of the head of the thigh bone or femur that acts as the ball and fits into the rounded socket of the hip bone or acetabulum. The neck of the femur is the region just below the ball of the hip joint. 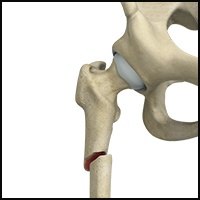 For more information about Subtrochanteric Hip fracture, click on below tabs. 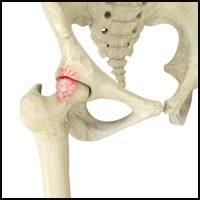 Femoroacetabular impingement (FAI) is a condition where there is too much friction in the hip joint from bony irregularities causing pain and decreased range of hip motion. The femoral head and acetabulum rub against each other creating damage and pain to the hip joint.

For more information about Femoroacetabular Impingement, click on below tabs. 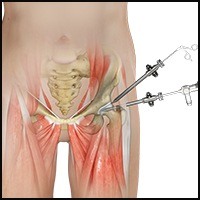 Hip arthroscopy, also referred to as keyhole surgery or minimally invasive surgery, is performed through very small incisions to evaluate and treat a variety of hip conditions. Arthroscopy is a surgical procedure in which an arthroscope is inserted into a joint.

For more information about Hip Arthroscopy, click on below tabs. 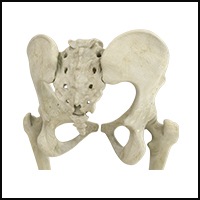 Posterior hip replacement is a minimally invasive hip surgery performed to replace the hip joint. It is also referred to as muscle sparing surgery because no muscles are cut to access the hip joint, enabling a quicker return to normal activity.

For more information about Posterior Hip Replacement, click on below tabs. 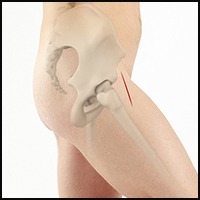 Anterior Hip Replacement is a minimally invasive hip surgery to replace the hip joint without cutting through any muscles. The surgical procedure involves a small incision in front of the hip, anterior, as opposed to an incision on the side or back of the hip. It is referred to as a muscle sparing surgery because no muscles are cut to access the hip joint enabling a quicker return to normal activity.

For more information about Anterior Hip Replacement, click on below tabs. 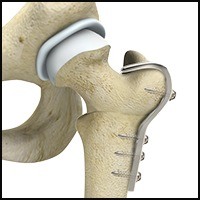 An osteotomy is a surgical procedure that involves cutting and reshaping of a bone. Pelvic osteotomy involves reshaping a shallow hip socket so that it accommodates the ball of the hip joint (femoral head).

For more information about Labral Tears of the Hip , click on below tabs. 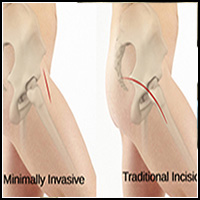 The hip joint is one of the body’s largest weightbearing joints and is the point where the thigh bone (femur) and the pelvis (acetabulum) join. It is a ball and socket joint in which the head of the femur is the ball and the pelvic acetabulum forms the socket. The joint surface is covered by a smooth articular cartilage that cushions and enables smooth movements of the joint.

For more information about Labral Tears of the Hip , click on below tabs.